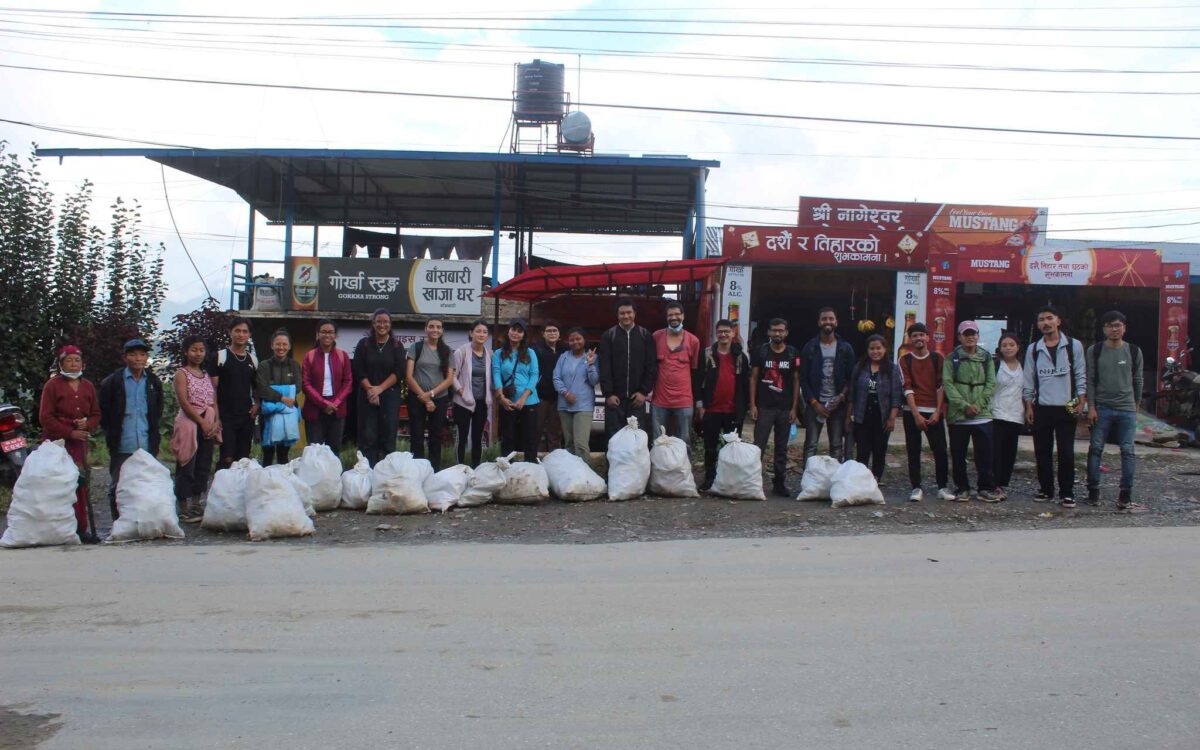 Small Mammals Conservation and Research Foundation (SMCRF) in collaboration with Kirtipur Municipality organized a cleanup hiking event in the celebration of the “World Clean Up Day 2022 on September 17, 2022. Altogether 32 university students and professional pre-registered for the event amongst which 24 volunteers including university students, professionals and a few local community residents from the Machhegaun Village registered during the event. A shuttle (Bus) was arranged and picked up volunteers from Sundhara, Balkhu and Kirtipur. After the participants registered, each participant was provided with a face mask, a pair of surgical gloves and a clean sack and a packed lunch. After taking a group photograph, the hiking started from the Pushpalal Park in the Machhegaun Village, Kirtipur Municipality ward # 4 at 9:00 hr and ended in the Bansbari, Dakshinkali Municipality ward # 4 at 16:00 hr. The area above the Machhegaun and the Champadevi Hills is known to be inundated with too many leeches. The group of 24 people, divided into a few sub-groups and separated at some distances was challenged by attacks from the swarms of leeches. However, the leeches were found surprisingly less as the group climbed up above 1800m asl. As the group reached at the ridge at 12:30, the hungry heads munched the packed lunch and quenched their thirst by the water carried in their bottle. Then, the showers incessant for two hours made the hiking and clean up difficult. On the other hand, the trail due to rainy days was too slippery several participants slipped off their legs and were wounded in addition to the wounds due to blood sucked by leeches swarms. As the rain stopped the trail in the ridge between the Champadevi and Hattiban hills were so slippery, we decided to wait for sometime at 14:00 hr to take a tea break and the volunteers sipped tea at a local temporary vendor in the area.

Despite these hurdles, 15 bamboo bins were removed from the Champadevi to Hattiban areas during the event. Participants also collected about 100kgs of plastic waste from the area. The waste was loaded in a vehicle parked on the road (Balkhu-Dakshinkali road) down the Hattiban hills for waste collection provided by Kirtipur Municipality and the waste was further managed by the municipality.