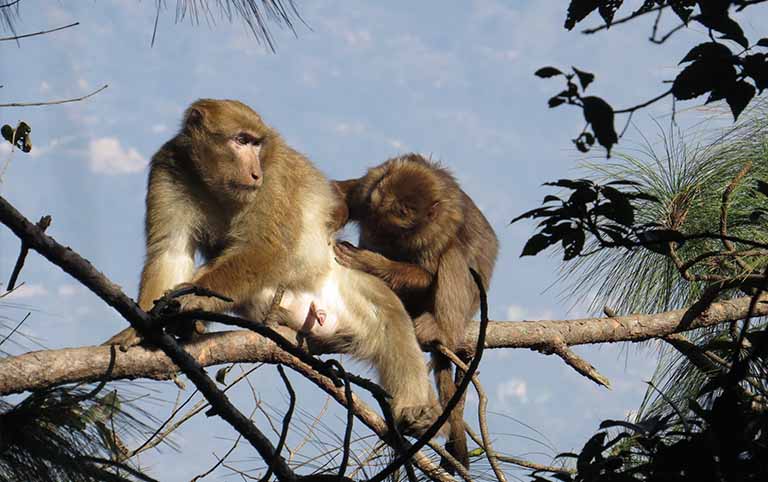 We are not only focused on research of Small mammals. This year we study the feeding ecology of Assamese macaque in Nagarjun forest with the financial support of Primate Conservation Inc, USA. Equipment needed for the study was donated by IDEA WILD. Assamese macaque (Macaca assamensis) of Nepal is designed as ‘Nepal Population’ which is endemic and endangered primate species of Nepal. This study is focused on their diet and its preference and general behavior in Nagarjun forest of SNNP. Scan sampling and All-occurrence sampling was used for feeding and behavioral observations from August 2013 throughout a year in different four seasons. Two troops of Assamese macaque were selected for the study from two different study sites depending on their feeding habit.  Altogether, 2008 scan and 21257 behavior events were recorded from the scan sampling of 508 hours. Among the two troops studied one group spend more time on resting followed by feeding while next group spend more than 50% of time on feeding and foraging purpose. Distribution pattern and availability of artificial food is directly affecting the activity budget of the macaque in Nagarjun forest.

Unlike other studies of Assamese macaque, Assamese macaques of Nagarjun forest are highly frugivorous during the study period and they utilize a wide range of trees, herbs, shrubs and climbers including insects and their secretions. Tree contributed large proportion of diet than other life form of plants. Tree species having highest IVI are food plants of macaque and most of food species in both study sites were patchily distributed in space.