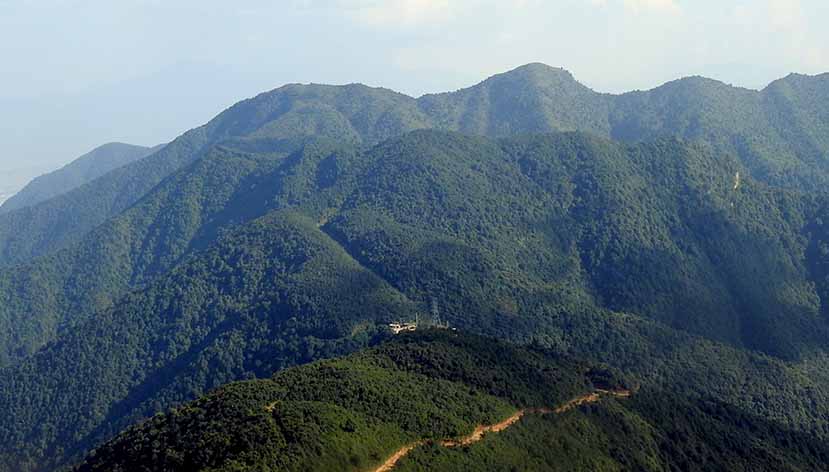 Inorganic waste, especially single-use plastics waste thrown by increasing numbers of visitors in recent years in the hiking trail “Chandragiri to Champadevi” hills located near the southern rim of Kathmandu Valley, the capital city of Nepal, has degraded the quality of habitat, impacting the wildlife. Despite being an important habitat for flora and fauna within the valley, detailed biodiversity surveys have not been conducted yet, causing a gap in knowledge. Thus, the goal of this project was to promote outdoor activities in the project area and create responsible citizens for biodiversity conservation through waste management.

To fulfill this goal, the three main objectives of the project were to (a) conduct clean-up campaigns, waste management training and awareness programs among local and youths in the project area, (b) collect biodiversity data of the project area (c) install information boards and waste bins in the hiking trail.

“Clean Up Chandragiri-Champadevi Trail, Nepal” was implemented between 2019-2021.

Overall, the stakeholder engagement, despite the pandemic and prolonged national lockdown, was encouraging. We collaborated with the local government including municipalities and ward representatives, local institutions i.e. Community Forest Users Groups (CFUGs), local indigenous groups, local women groups, like-minded non-governmental organizations and local entrepreneur. Overwhelming number of youths participated as clean up volunteers despite the pandemic. We could gather approximately 600 kgs of trash during our cleanup hikes. When we interacted with locals we found that the COVID-19 brought more trash in the forest area because the flow of people to these sites were increasing and these forests have become a respite for people after continuous lockdown. In collaboration, we also installed locally crafted eco-friendly waste bins along the route.

Training on waste management for CFUGs members was not only able to deliver the concepts and skills of the waste management but was also able to sensitize on how those trashes can be hazardous to the wildlife as there is the chance of entanglements in animal’s body or animals accidentally ingesting plastic and other hazardous material. The interaction with the school awareness program showed the scale of awareness of students towards wildlife and the environmental issues as all of them lived nearby the forest area and had experienced encountering wildlife at some point. SMCRF’s previous awareness programs was also one of the factor that the students have knowledge on these topics. Students from Chandragiri for instance were well aware about pangolins, students from Kirtipur had heard about incidences of leopard attacks and thus were aware of human-wildlife conflicts. Hattiban, a famous picnic spot of Dakshinkali, were already tackling with the problem of forest area littering hence students were aware about the issue of inorganic waste in forest.

A rapid assessment of biodiversity was conducted from 14 December 2020 to 6 January 2021, spending 192 man-working days. The Chandragiri-Champadevi complex was overlaid with a grid of 2×2 km2. Among 12 square grids in total, half of them were chosen purposefully to cover six community forests or six routes leading to the Chandragiri or Champadevi heights. Mammals were studied using appropriate methods, such as camera traps for nocturnal species, live trapping for small mammals, mist netting for bats, and sign surveys for indirect evidence of the species. Birds were surveyed using line-transect methods, butterflies were studied in 20*20m2 grids, and plants were surveyed using 10x10m2 plots placed at 150 m intervals along each site’s transect.

Altogether 37 species of mammals from 8 orders and 19 families were identified. Ten species were found in the camera trap survey, eight in live trapping, seven in indirect or sign surveys, and 12 in the literature study. Two globally Threatened, two globally Near Threatened species while other species are classified as Least Concern in IUCN Red List. Moreover, in the National Red List of Nepal, six species are nationally threatened, one near threatened and six are data deficient. The current survey recorded 153 bird species belonging to 13 orders and 48 families. Among these 106 species were recorded in line transect method while 47 species were added by Mackinnon’s species richness methods. Compiling the literature, 302 species of birds representing 20 orders and 65 families have been recorded from Champadevi-Chandragiri Complex. Moreover, 13 species of butterflies in the study area and 40 species of trees, 50 species of shrubs and 127 species of herbs have been recorded from the study area.

Community forest representatives are quite aware that the wildlife in the forest are getting threatened due to increasing pressure from visitors, forest fire incidents, poaching, etc. Although not many incidents of waste being hazardous were reported, people remembered few cases such as plastics being stuck in the eagle’s feet. There were no proper established mechanism of waste collection and its management within our study sites which is the edge of the city centers. Since the major part of the hiking trails are in the upper elevation, there is hardly any institution (government, private sector or any community based organizations) that are handling the issues of waste management except a few fragmented ones.

Few CFUGs are cleaning waste during their yearly cleaning and management of the community forest and they handover those waste to the municipality, however, it was not sufficient to tackle the waste problem. Most of the parts of the trails that are located comparatively in lower elevation parts and where there is larger mobility of people such as in picnic spots, waste including plastic waste are collected in a pit and are burnt. No community forest has specific planning for the solid waste management in their yearly operational plan. We therefore recommend that there should be a proper mechanism of waste management in these trails for which an integrated effort should be made among city government, local community based organisations and the private sector. Incentives based approach should be in place for hikers not to leave their waste in the natural place.