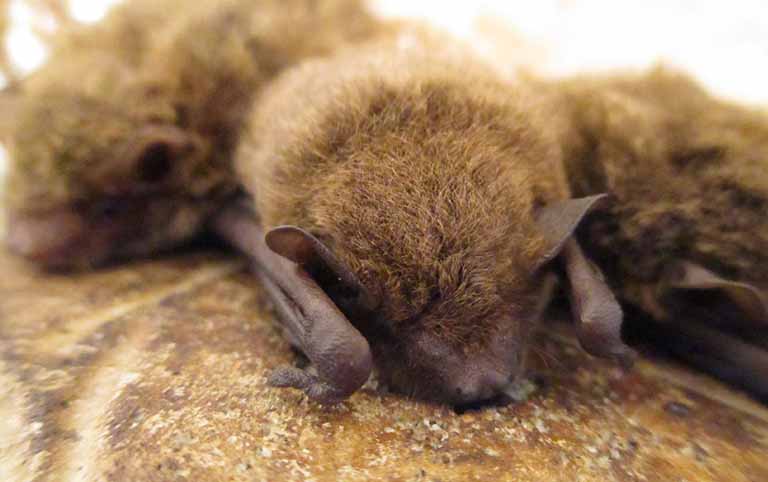 The study by Dibya Raj Dahal studied the seasonal variation in abundance and distribution of bats in Sunsari-Morang industrial corridor. The main objective of the research was to investigate seasonal and spatial variations in bat diversity in A. Ithari, B. Khanar C. Duhabi, D. Hattimuda and E. Tankisiniwari. Specific objectives were to determine species diversity, examine their abundance and distribution, and to analyze anthropogenic threats on them. The populations of bats were counted and collected by roost survey, mist netting and photographs. Most of species were identified by morphometric measurements and it is done with the help of the standard taxonomic keys (Bates and Harrson 1997 and Srinivasulu et al. 2010). Scotophicullus kuhli was identified by skull and baculum morphology structure. Total seven species of bats were recorded in Sunsari-Morang industrial corridor. Within seven species albino of Cynopterus sphinx was observation and collected as the first record of albino bat, similarly Scotophillus kuhli was confirmed for the Nepal. The primary data were collected by roost survey; moist netting and simple hygrometer reading and collected data were analyzed through parametric and nonparametric test by using SPSS version 16. Population densities fluctuate seasonally responding to temperature variation but the species diversity was the same in all seasons. Anthropogenic factors like deforestation, killing for bush meat, urbanization, and use of pesticide were recorded as direct threats to the population density and species diversity of bats. The study was conduted in urban settings of Eastern Nepal under technical guidance of SMCRF.