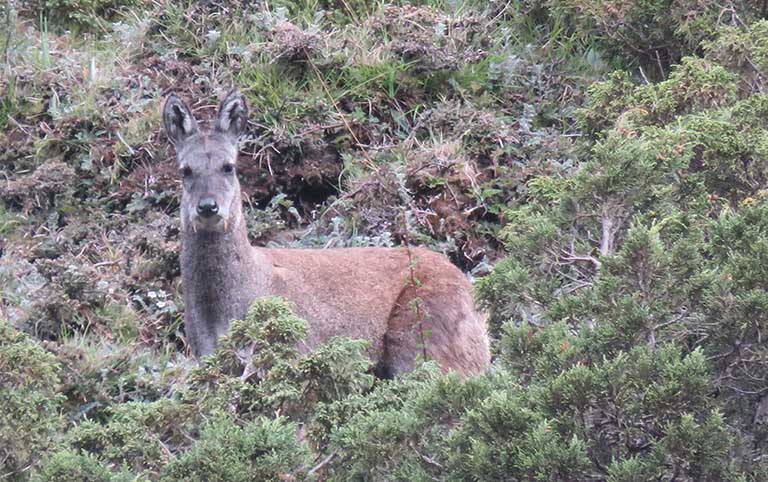 Nepal have three species of Musk Deer. These species are distributed from 2200m to 4300m elevation. They are globally Endangered according to IUCN Red List and listed in CITES Appendix I. National Park and Wildlife Conservation Act 1972 of Nepal has listed Musk Deer in the protected animals and there is provision of legal punishment for harming the species. The population trend of the all three species is decreasing, and the population estimate of these species in Nepal is still not known.

The study was conducted in the Manaslu Conservation Area (MCA), Gorkha, which is one of the suitable habitats for the Musk Deer. The research was conducted in the two phases; in winter and summer season. The research was conducted in the Prok and Mugumba region of Chumnumbri Rural Municipality, Gorkha. Both areas were suitable habitat for the Musk Deer considering the condition of the landscape and available of the food. The line transect survey method was adopted. The condition of the habitat, plants species, slopes, aspects and water source were recorded. In MCA, ten local peoples with interest and commitment in the research and conservation of Musk Deer were trained as citizen scientists. We taught them the method of handling GPS device, camera traps, compass and data recording methods. We also involve them in the research of Musk Deer in MCA including the conservation awareness events.

During both surveys, camera trap survey was also conducted. Ten camera traps were installed in ten potential locations in the habitat of Musk Deer. The camera trap was successful in capturing the Musk Deer and also other wild animals in the MCA. During the survey we also live sighted the male and female Musk Deer.

We also communicated with the local government bodies of the MCA. We distributed them the poster and brochure. We discussed about the research and current threats to the Musk Deer in their region. They were positive about this research and expressed their commitment to support this research and conservation program in MCA.