Chepang, Cheuri and Chamera: Maintaining a delicate balance through conservation awareness in Chepang community in Nepal 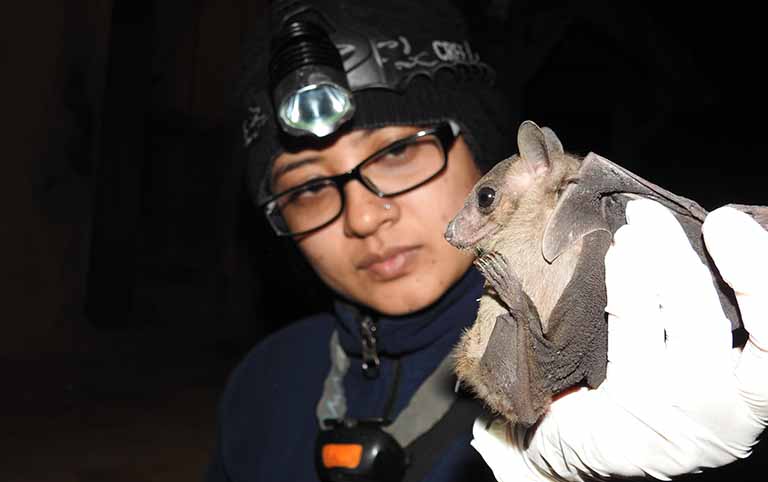 Butter tree Diploknema butyracea (Cheuri -Nepali) is one of the major crops consumed by critically marginalized Chepang community of Nepal. This fruit plant is exclusively pollinated by fruit bats. Chepang also consume fruit bats as a major delicacy and hunted for sale. This traditional behavior of Chepang community is one of the most widespread known threats to fruit bats in Nepal. Yet understanding its nature and impacts on their livelihood has been poorly known. Direct observation in the Bat hunting sites and questionnaire survey to 256 local respondents (27 active hunters) in Shaktikhor, Siddhi, Korak and Lothar Village Development Committees of Chitwan district was conducted. The result revealed that most of the hunting was done during flowering and fruiting of Butter tree plant using locally prepared mist-net placing near the Butter tree plants and bat passing corridors. Among fruit bats, Leschenault’s Rousette Rousettus leschenaulti are most trapped species whereas Dawn Bat, Eonycteris spelaea are captured occasionally. The trapped insectivorous bats are not eaten and released instantly. All respondent knew that bat visits the Butter tree plant for nectar and fruits whereas only 7% knew that it also helps in pollination and seed dispersal. 57 % reported that they have trapped/killed the bats for local consumption where 17% killed for local as well as commercial purposes. Almost all active hunters believe that bats visiting butter tree have decline sharply, on the other hand 67% respondents reported the decline in Butter tree production in the last five year. Only 12% respondent believe that killing Bats adversely impact Butter tree and their livelihood. The low reproductive rate, continue hunting and market demand of bat meat could be significant threats to the survival of this species which is directly related to the production of Butter tree plant. Conservation organization responsible for wildlife conservation as well as individuals must make special efforts to prevent illegal hunting. Similarly, community-based conservation initiatives should be encouraged to balance the symbiotic relationship between Chepang, Butter tree and fruit bat.