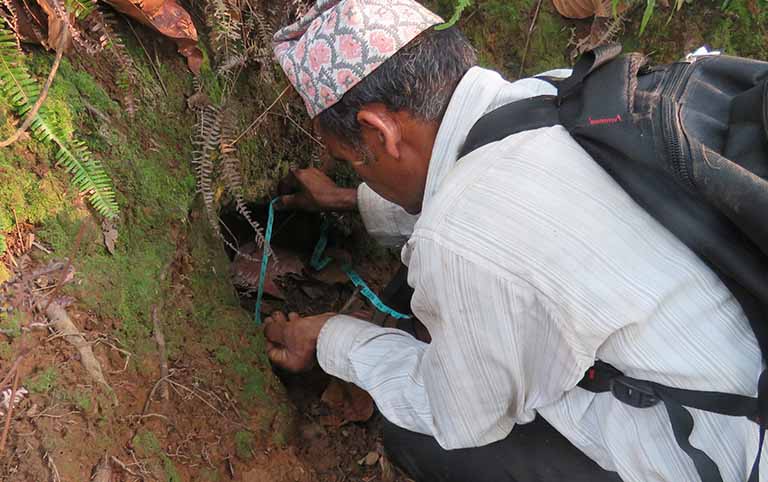 Pangolins (Genus Manis) are the most typical small mammal in the wild with unique rows of overlapping scales and long tongue. Of the four species of pangolins of Asia, Indian and Chinese pangolins that are found in Nepal are recently listed in Appendix I of the CITES agreement. Because of habitat destruction and overarching trade both species are at risk of extinction. To generate baseline data on the status, distribution, habitats and threats of pangolins in Nepal, the National Pangolin Survey 2016 was conducted in association with People’s Help Group (PHG) with initiation from Ministry of Forest and Soil Conservation (MoFSC), Department of National Park and Wildlife Conservation (DNPWC) and funding from Hariyo Ban Program, WWF Nepal. Seventeen districts, representing all five development regions of Nepal, were selected on the basis of outcomes of desktop review, habitat suitability prediction, and consultation with experts. The districts were surveyed during June 2016. Questionnaire survey and Focus Group Discussions were conducted to gather information on status, local distribution, threats, and trade and seizure cases of pangolins. Block/strip line transect of 500 m and plots of 100 m X 100 m at intervals of 100 m in each transect were surveyed in detail to collect data on habitat related variables. Forty three districts were confirmed to have pangolins of which total 31 districts were added as new distribution sites by the

Out of the 43 districts, 14 districts were newly confirmed by the National Pangolin field Survey, 10 districts from the record maintained by DFO and 23 districts by literature review. Altogether 115 transect of 500 m and 346 plots of 100 m × 100 m were surveyed. Detail parameters of 1050 burrows were measured along with other habitat variables. Most of the burrows (48.3%) were recorded in areas with canopy cover upto 25%. Almost 46% of the burrows were located in 25-50% ground cover, 46% burrows in brown soil, 69% burrows in medium soil texture, and almost 76% burrows were in elevation between 500m to 1500m. Study sites posed multiple threats like fire, trampling, litter collection, grazing etc. A total area of 20,750 sq. km covering 53 districts have been predicted as suitable habitats for pangolins in Nepal. Central Nepal had 50% potential habitats followed by eastern as 33.20%. Western Nepal showed the least area (16.80%) as potential habitat in Nepal. Findings of this study will be crucial to initiate conservation programs from community level to national level, discourage poaching and illegal trade, and develop suitable habitat management strategy for pangolins.