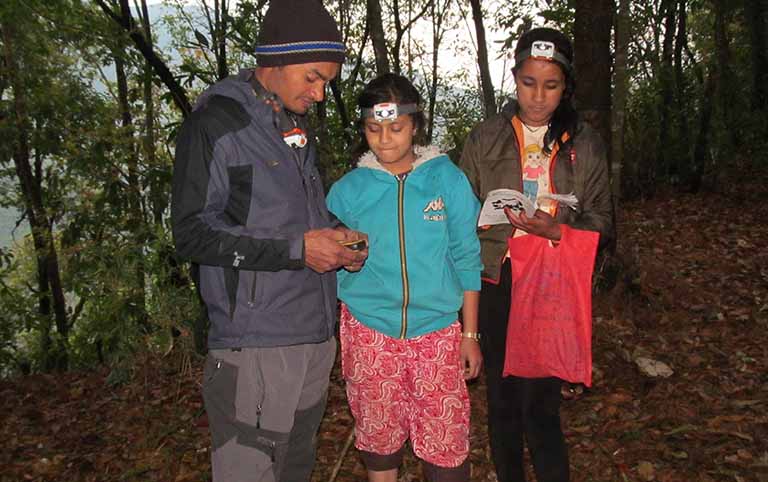 Largely desired for the meat and scales, pangolins are currently the most heavily trafficked mammals in the world and they are highly sought declining from nature. Critically Endangered Chinese pangolin and Endangered Indian pangolin are the two species that occur in Nepal. These species are listed under CITES- Appendix-I and also protected in Nepal. Although twenty pangolins has been rescued and released at natural habitat of the Kathmandu valley since 2008, the status of the species and their habitat as well as released individuals is unknown due to lack of monitoring. The project funded by Taronga Conservation Society Australia is conducting survey on pangolin and addressing its conservation issues in Kathmandu valley since February 2018. The conservation education workshops including the capacity building trainings about pangolin monitoring techniques have been conducted in three different districts in collaboration with respective District Forest Offices (DFOs), Range Forests, Community Forest User Groups (CFUGs), Women groups and Youth groups. Capacity building training was given to total 67 participates in three different districts (at Suryabinayak in Bhaktapur, at Chandragiri in Kathmandu and at Godawari in Lalitpur). A Pangolin Conservation Team (PCT) has been formed of eight members from amongst the trainees of the capacity building trainings at each three survey sites. Camera trapping, transect surveys, and habitat burrows of pangolin.

The survey team involved the PCT formed at each survey site. We camera trapped Chinese pangolin during the survey at Chandragiri. There was also record of buried skeletons and scales of pangolin. The infrastructure development such as cable car and its towers, road construction, grazing, trampling and logging, soil mining and forest fire were identified as the major threats to the habitat of pangolin in the valley.