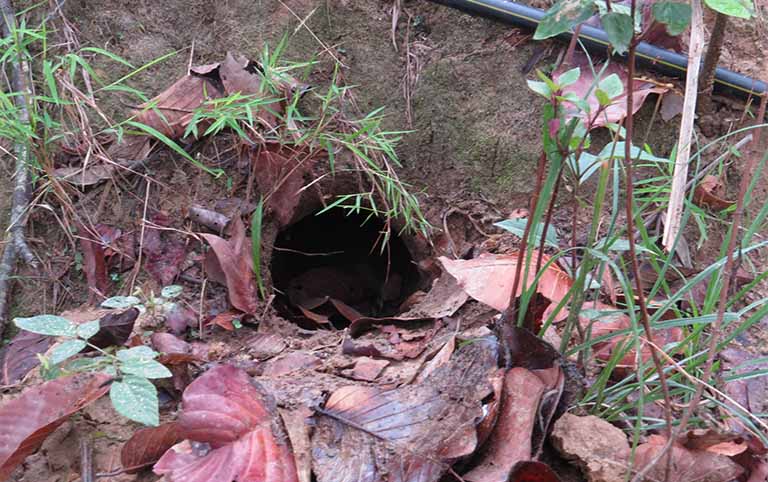 Eastern Nepal has suitable habitat for pangolin, but it has been also considered as prone pangolin trade area. The trade scenario, status, distribution, ethno-zoological importance, threats to the pangolin was analyzed and simultaneously performed conservation awareness program in seven VDC’s of two districts (Dhankuta and Ilam) of eastern Nepal from March-May 2014.  We recorded 1328 burrows (old-1046, new-207 and fresh-75) of Chinese pangolin (Manis pentadactyla) in 168 hectares land. The burrow density (fresh) was higher at Ilam (0.623/ha) than Dhankuta (0.293/ha). Distribution pattern of the burrow was significantly different along the VDCs and elevational gradients. Higher number of burrows was recorded at Ghorlikharka VDC, Dhankuta and burrows were abundant along 1100-1200 m asl. Maxent model predicted soil type, annual precipitation and elevation as major determinant for the pangolin distribution at Dhankuta whereas annual precipitation, aspect, elevation and landcover at Ilam. We also found higher number of burrows at agricultural land where water bodies directly influenced their distribution. We also found Bengal Monitor Lizard (Varanus bengalensis), Himalayan Crestless Porcupine (Hystrix brachyura) and Indian Hare (Lepus nigricollis) utilizing the burrows of the pangolin and medicinal value such as to cure gastro intestinal problem, cardiac problem, back pain relief, bone problem etc. Their scale was used to make rings and in curing burn wounds. We found 71.1% of the respondents who had negative perception towards pangolin, they said that sighting of the pangolin will be bad luck, but this perception had not played any role in reducing pangolin trade. We conducted community and school awareness program through posters and brochures distribution and broadcast awareness program through media (FM) to educate people about the benefits of pangolins for their livelihood.