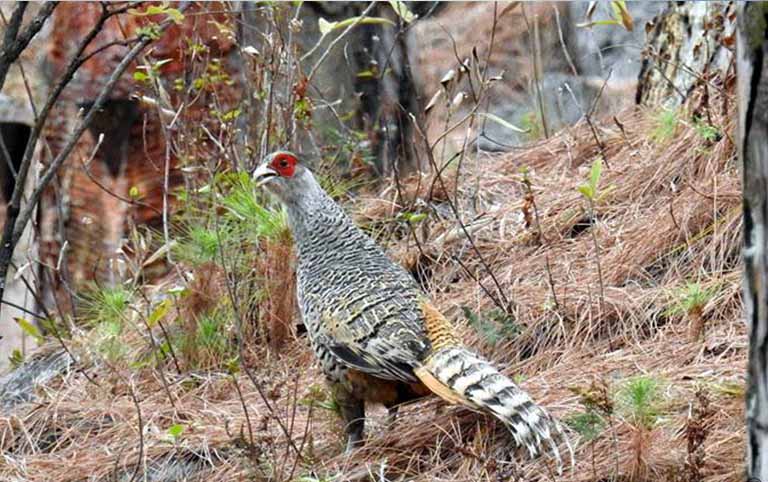 Nepal despite classified as globally rare and Vulnerable, Cheer Pheasant, Catreus wallichii study in the western part of Nepal is severely limited. Species distribution modelling and informal discussion with local people suggest that it is present in some areas of Bajura district but to validate this, scientific studies are needed. In April 2016, short informative news of the Cheer was broadcasted for a month in two local F.M. stations. Based on local responses, the preliminary survey was carried out in nine locations where five locations were confirmed with the species presence. Cheer was observe directly in four VDCs and local people reported the presence of Cheer from seven  other VDCs. Dawn call count method was carried out in five confirmed locations to estimate the population status.  The population data revealed that the study area is one of the important habitats of Cheer with overall density of 7.77 pairs/km2. The study confirms two breeding success of Cheer Pheasant first time from far-western Nepal. Although there is good population of the species, luring the captive Cheer is still prevalent as we were able to record captive Cheer from three different places. Lack of enough awareness, hunting and poaching, luring, collection of eggs for local consumption and wildfire for promoting the grassland has adversely affected the existing population of Cheer by hunting and poaching, luring, collection of eggs for local consumption and wildfire for promoting the grassland. Furthermore natural predator like Yellow-throated Marten, Large-billed Crow and Golden Jackal posing threats to Cheer population as they try to steal the eggs/chicks. Detailed population survey on remaining presence area, habitat and breeding ecology and conservation awareness to local people and concern bodies are highly recommended to conserve this species in the area.